Edit
This article is a stub. You can help Sunrider Wiki by expanding it.

Asaga Oakrun is a companion character in Sunrider. 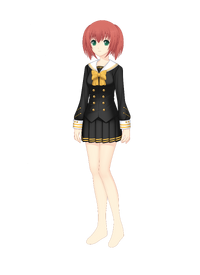 A self declared hero of justice, Asaga wanders the galaxy doing odd-jobs for the cause of freedom, justice, and a little money on the side. Despite her apparent lack of maturity, she is an ace pilot and can fly as easily as she walks. With her own Ryder made by her longtime friend Chigara Ashada, the Black Jack, she can successfully accomplish almost any task in the battlefield, as either long-range sniper or close range melee fighter. She possesses an eternally optimistic disposition and has a strong “can do” attitude. Her English Voice Actress is Kira Buckland and her Japanese Voice Actress is Sakura Matsuri.

Spirit : She has strong moral principles, even if it complicates long-term plans.

Asaga is first encountered by the Sunrider's crew at Tydaria, where she worked as mercenary freelancer patrolling the planet and defeating pirate raids. After defeating together an attack led by Cosette Cosmos, Asaga agreed to help Captain Shields in his crusade against PACT if he helps her destroy a pirate base in the Tydaria asteroids belt, which would let her leave while receiving her payment and sure that the pirate raids would subside. After successfully achieving that, Asaga becomes with her friend and support element Chigara Ashada the first Ryders used by the Sunrider. Chigara in particular becomes a key element, having a Ryder tuned both for anti-Ryder combat and (in minor measure) anti-Ship combat. She served with the Sunrider at the Incident at Versta

After the incident at Versta, the Sunrider was given a request by King Jaylor XII of Ryuvia to retrieve the crown jewel, a relic of Ryuvia.

After the Sunrider recovered the Crown Jewel from Sola and escaped the Sharr' Lac, they are approached by a massive PACT fleet of over 60 ships, commanded by Veniczar B. Cullen, having been ordered by the PACT Leader Veniczar S. Arcadius to find his runaway bride, The Princess of Ryuvia. The Crown Jewel having the property of shining near the presence of the Royal Dynasty ruling Ryuvia, Cullen demands it and no matter the choice the captain makes, even if he hands it over to them, the Sunrider gets hammered by the PACT fleet.

With the Sunrider being pelted by weapons, the hull fracturing, the Core nearing its end, Kayto Shields orders the Ryders be launched in a futile attempt to retaliate. As a a reactor meltdown (and the total destruction of the Sunrider) seems to be inevitable, Asaga comes out on a Hologram and proclaims that she is the Ryuvian Princess, her real name being Asaga di Ryuvia, and that she is the one who ran away from home. She apologizes to the captain, thanks him for all the fun, and then is is taken away in exchange of Cullen sparing the Sunrider.

Asaga di Ryuvia had escaped from the Palace in Ryuvia Prime to run away from the arranged marriage with Aracadius since the beginning, with her friend Chigara (which she had befriended after she arrived at Ryuvia after the Diode Catastrophe) as both partner and accomplice. Using her genetically enhanced skills as part of ryuvian royal line to surpass normal pilots, she used the Black Jack to survive by being a mercenary freelancer, pursuing adventure and justice while trying to run away from Ryuvia. After realizing that such a thing was impossible, Asaga resigned to her fate as would be bride of Arcadius, a sacrifice presented by Ryuvia in hopes of being spared a PACT invasion. Despite it, after the ceremony, Arcadius betrayed the treaty, killed King Jaylor, and ordered the occupation of all territories held by Ryuvia.

However, she was moments later rescued by the Sunrider at her forced wedding with Arcadius at Ryuvia Prime's Palace as the objective of Operation Wedding Crash, after which she returned to the roster of pilots of the Sunrider. This led to her participating in the Battle of Far Port where she successfully destroyed Veniczar B. Cullen Flagship, killing him in a showcase of her Ryuvian royalty traits (that let her control a high concentration of energy after removing her machine's limiter, and successfully firing it as laser, destroying the battleship in one hit).