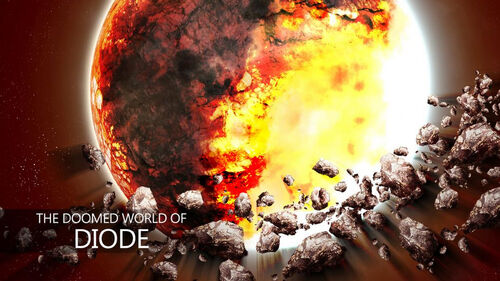 Diode was a planet in the Sunrider universe.

The planet, once a peaceful colony, was located in a binary star system where one of the stars had collapsed into a black hole. A scientific base was set up here to conduct the Paradox Project, researching time manipulation. This continued until the Diode Catastrophe, where the research station and most of the planet were swallowed by a miniature black hole due to sabotage by the Prototypes, leaving what remained of the world as a broken husk with it's core exposed to space, surrounded by a debris belt made from chunks of the planet's crust that had been thrown into orbit during the planet's ruination.

Chigara Lynn Ashada was the daughter of the Paradox Project head, and lived on Diode till the Catastrophe.