From Sunrider Wiki
Jump to: navigation, search
This article is a stub. You can help Sunrider Wiki by expanding it.

Kayto Shields is the protagonist (player character) in Sunrider.

He is the captain of the starship Sunrider. His English Voice Actor is Jonathan Cooke.

You make the most important decisions for him, such as whether to fight one way or another at certain points, and some other pertaining to moral and political situations. These decisions can impact the relationship with the other members of the crew, and in general can affect the ongoing plot to a certain extent. As such he may take two personalities depending on these decisions:

Kayto Shields is a commissioned officer with the rank of captain in the Cera Space Force, and the commanding officer of the Assault Carrier Sunrider. He lived at Cera City, together with his family, and attended high school together with the one that would become his First Officer, Ava Crescentia. At some point he enrolled in the Cera Space Force, where he was trained in order to successfully command the new class of ship that was supposed to revolutionize war, the Assault Carrier.

However, the first day of his command, Cera swiftly fell against PACT forces in the Invasion of Cera. He managed to survive and escape the enemy with the Sunrider, but the attack successfully destroyed the military and civil command of Cera, and all surviving Cera forces surrendered. Refusing to do the same, the captain has since waged his particular war against PACT, making use of his considerable tactical prowess.

Was noted to have a sister and both parents (all of unknown age), the three of them living until the Invasion of Cera. After that, their fate remains unknown (a thing which torments Shields nonstop). 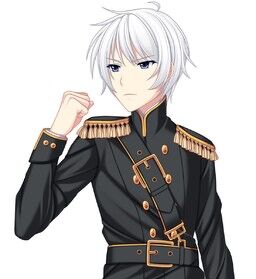 Kayto as he appears in Sunrider: Liberation Day