Following the collapse of the Holy Ryuvian Empire and the near extinction of human race in the Ryuvian Wars, humanity briefly entered a Dark Age. The remnants of the Ryuvians retreated back to its core worlds and faded from power, their technology now long lost.

However, studying derelict Ryuvian ruins and artifacts allowed humanity to slowly but surely reclaim its master place in the galaxy. Ruined, but not defeated, humanity once again took to the stars to colonize undiscovered worlds. Fortune smiled upon the courageous explorers, and a class-28 paradise planet was discovered in the far reaches of the galaxy. Named New Eden by its settlers, it was said it would be the center of humankind’s revival. Overflowing with natural resources, arable land, and fresh water, news of New Eden’s discovery spread swiftly through the galaxy. The people of New Eden named themselves the New Empire, and boasted they would restore the glory of the old Holy Ryuvian Empire of the legends. Backed by the seemingly endless resources of New Eden, the New Empire quickly developed a formidable military force. Countless neighboring worlds decided voluntarily to give themselves to the Empire. Those who did not were soon after seized and made vassals. The Imperial Age had begun. 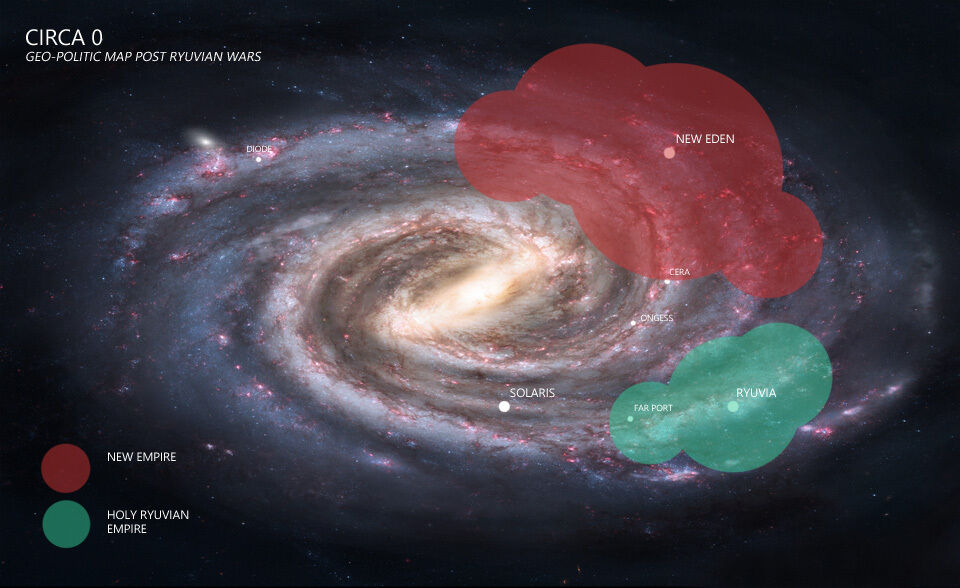 However, with power came inevitable oppression. The rulers of the New Empire became drunk with power, and soon fancied themselves reincarnations of the Holy Ryuvian Lords. They ruled their people with an iron fist. New Eden became the home of the rich and powerful, where the Imperial elites would live in lavish luxury. The rest of Imperial society lived in abject poverty, their minds brainwashed by propaganda and their livelihoods taken for the benefit of the rich. 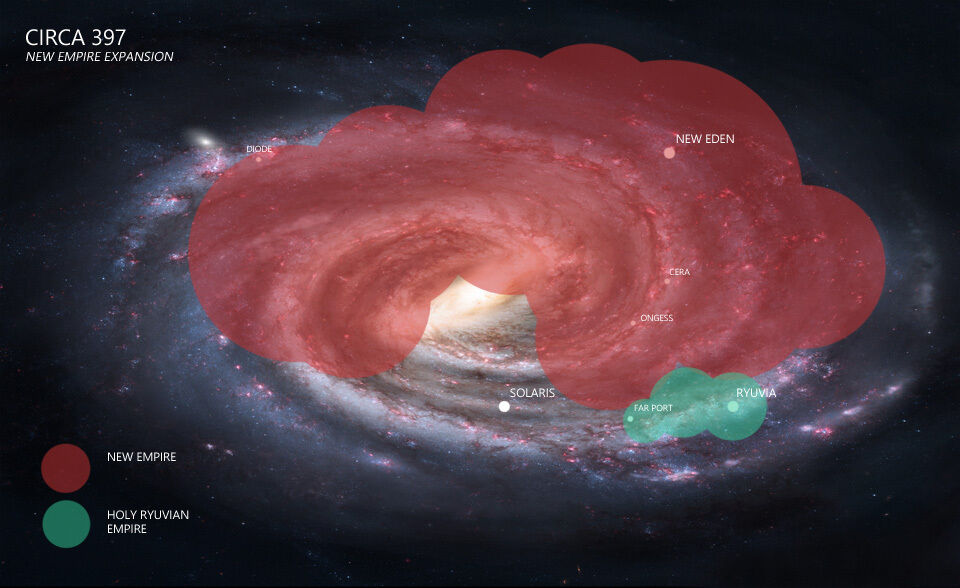 Circa 397, the New Empire appeared destined to rule all of humanity. The decaying remnants of the Ryuvian Empire was written off as doomed, and the remaining humans of the galaxy grimly waited until they inevitably became slaves of the New Empire.

However, the free people of Solaris refused to become slaves. Under the leadership of legendary Admiral Madeline Grey, the remaining free worlds of the galaxy united under the banner of the Solar Alliance. Declaring the universal truths of freedom and democracy, Admiral Grey scrambled together a massive armada from fleets across the galaxy, and met the Imperial onslaught at the now mythical Battle of Solaris. 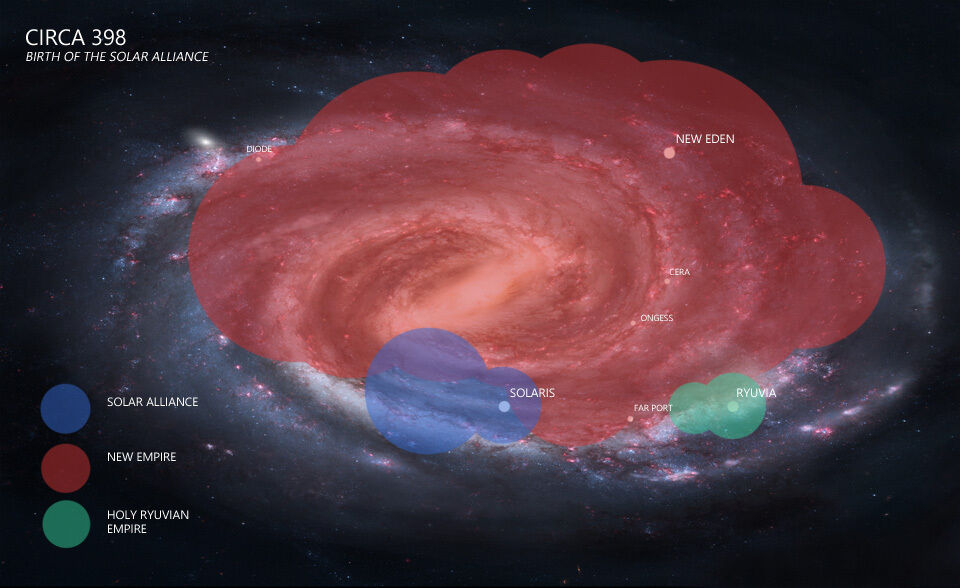 The combined mettle of free people across the galaxy brought forth a miracle, and the Imperial fleet was routed. The setback at Solaris reverberated throughout the New Empire, and shook the Imperial Court. Frictions between the Boy Emperor, who had ascended the Imperial throne at the age of 14, the Imperial Consort (his mother), and the Counsel of Advisers, broke into an outright power struggle. Further rattling the Empire was the resurgence of the Ryuvian Empire, whom everyone had previously written off as the sick man of the galaxy. Emboldened by the Solar Alliance’s victory, the Ryuvians finally chose to reclaim the heritage of their ancestors and join the Alliance in its war against the Empire. Worst of all, the first signs of an internal revolutionary movement began to take form inside the Empire. Calling themselves the Compact, the citizen-slaves of the Empire began to openly question their rulers after their catastrophic defeat at Solaris. 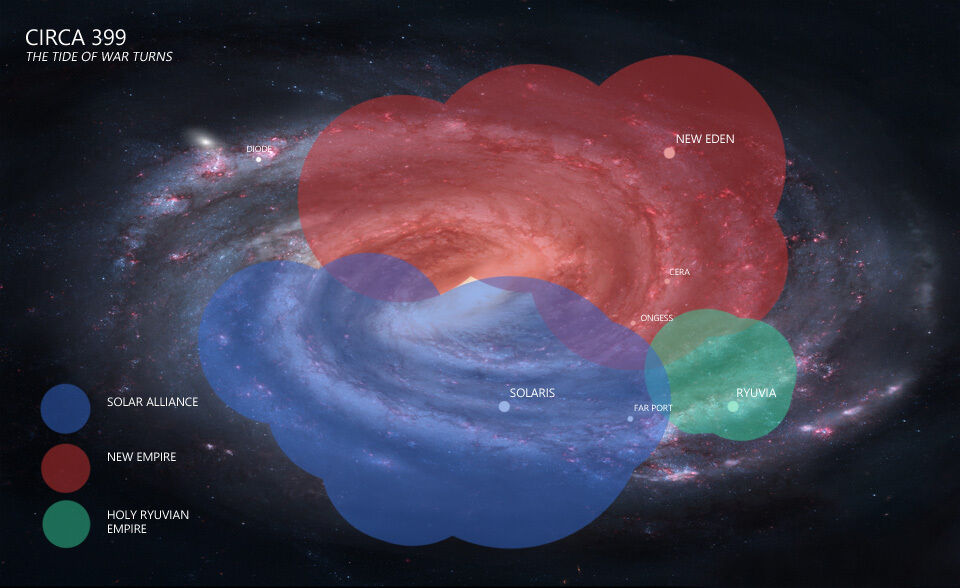 Faced with a war on two fronts, a power struggle within the Imperial Court, and internal revolution, the Empire had no choice but to pursue peace. The Treaty of Vespa formally ended the Alliance-Imperial War and restored an uneasy peace to the galaxy. 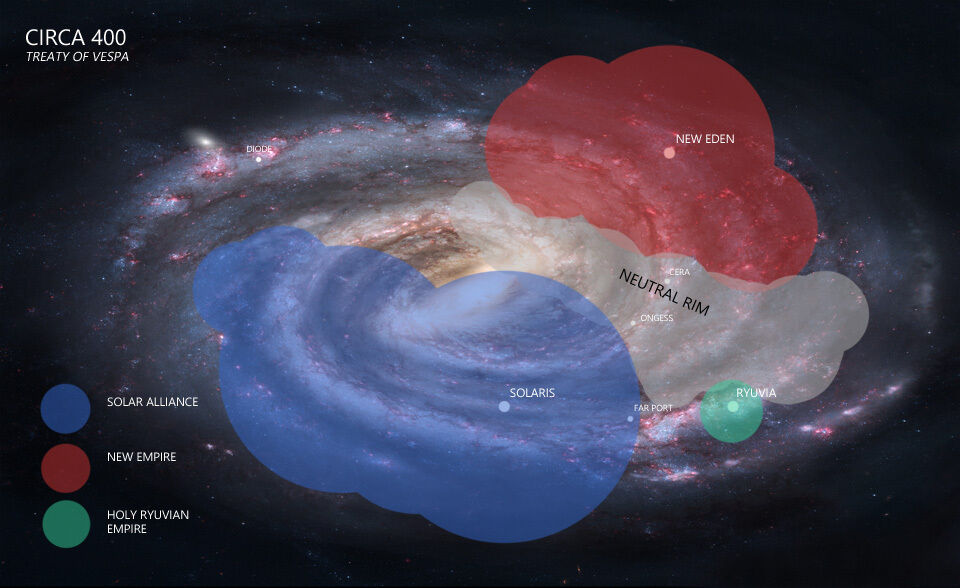 The Alliance emerged as the uncontested winner of the war. Solaris, which was nothing more than a merchant world a mere decade prior, won territory which stretched from the hub world of Far Port to the Eastern quadrant. Far Port was a former Ryuvian world which was liberated from its Imperial occupiers by the Alliance. While the Ryuvian fleet had admittedly abandoned the world to its fate in the face of an imminent Imperial invasion during the war, most had expected the Alliance to return Far Port to the Ryuvians at the conclusion of the war. However, Far Port proved to be far too strategic a world for the Alliance to give up, as it served as the gateway into the Alliance core worlds. After having assisted the Alliance in the war, Ryuvians would never forgive the Alliance for essentially stealing Far Port. After the Far Port scandal, the Alliance-Ryuvia alliance quickly disintegrated. With the loss of Far Port, Ryuvia’s brief resurgence ended, and the old Ryuvian nation – now no longer even an empire – continued its slip into oblivion.

Over the course of the next century, the Alliance developed into a military, economic, and cultural powerhouse, and the New Empire declined further into internal power struggles and unrest. The revolutionary group Compact, now funded by Alliance covert operatives, spread the fires of unrest throughout the New Empire. The assassination of the Emperor in 494 sounded the death knell of the New Empire. After ruling most of the galaxy with an iron fist for nearly 500 years, the New Empire formally collapsed in 495. [1]