Some commentators have called the galaxy the battleground of human ambition. Throughout history, men and women have longed to amass power and leave their marks on history. Fleets have been assembled, and billions of souls have clashed in battle, all for the sake of leaders intent on preserving their legacy. All of this suggest that humans came to dominate the galaxy because no other species could exhibit such an unbridled desire for power and yet not destroy themselves before discovering FTL travel.

Whether this is true or not, the people of the New Empire longed to rid themselves of the oppressive hands of their Imperial overlords and forge their own course in history. No matter how tightly the Emperor clenched his iron fist, dissent formulated in the dark shadows of the Empire. The Compact was an underground liberation movement which had a vast network of conspirators throughout the subjugated Imperial colonies. While considered nothing more than a petty criminal ring by Imperial authorities during the height of Imperial power, the Compact became a legitimate independence movement with the formation of the Solar Alliance. Led by an idealistic Venassar during the time of The Alliance-Imperial War, the Compact received substantial financial and military support from Alliance operatives who sought to disintegrate the Empire from within.

The conclusion of the Imperial-Alliance War left the New Empire in a substantially weakened state. The Treaty of Vespa led to substantial loss of the Empire’s former territories and left the Alliance to dominate the southern half of the galaxy. Worse, when the Imperial Court should have been focusing on reconstruction efforts after the war, it instead fell into infighting. The former mighty rulers of the Empire betrayed themselves in a last effort to cling onto what little remained of the Empire’s bounty. Civil War became inevitable.

The Alliance initially greeted the Venassar with welcome, and offered the Venassar a shared vision of a galaxy based on freedom. However, it soon became clear the Venassar had his own plans. The Compact finally marched on New Eden in 494 and looted the ancient Imperial capital. The elite were torn of their clothes, beat in the streets, and summarily executed, then displayed for all to see. The Emperor narrowly escaped the chaos, only to be assassinated by Compact agents shortly after fleeing the capital. The sacking of New Eden shocked Alliance space. The Venassar’s previous oath of promoting justice appeared forgotten, and the Venassar himself vanished from public view without a trace.

In 495, the New Empire formally collapsed. The figure known today only as Veniczar S. Arcadius emerged from the shadows and declared the formation of the new PACT order. As the leader of every formerly enslaved citizen of the New Empire, Arcadius soon turned to the Neutral Rim in search of more riches. Exhibiting a cult-like zeal for their leader, the citizens of PACT rallied around Arcadius. With each conquest, the people’s exuberance grew. For Arcadius, total control was easy, for a people who have never known freedom for generations could only be dominated by a new charismatic dictator who offered the former slaves wealth, power, and respect.

The year today is 503. PACT has aggressively encroached into the Neutral Rim in violation of the Treaty of Vespa. War between the Alliance and PACT appears almost inevitable. Instead of taking decisive action to stop the PACT threat, the Alliance has instead split into two parties. The Progress Party, which currently controls the Solar Congress, seeks the peace route and believes that allowing the Veniczar to control half of the Neutral Rim would safeguard Alliance interests and prevent bloodshed. The United Univeralists believe war is the only option and favor militarization. Neither party has managed to accomplish anything in the Solar Congress and the President has been powerless as to form a consensus. While the Alliance debates, the power of PACT grows by the day… 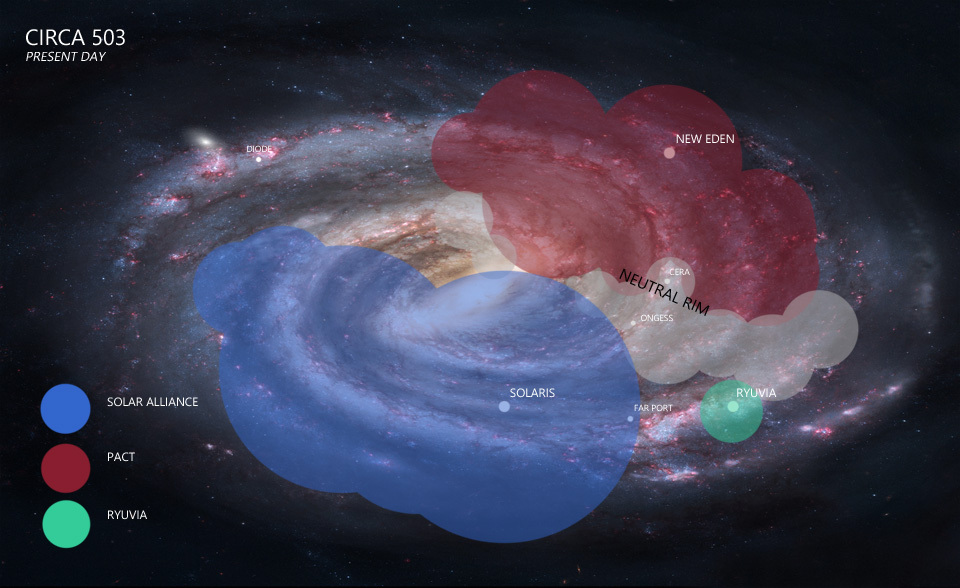